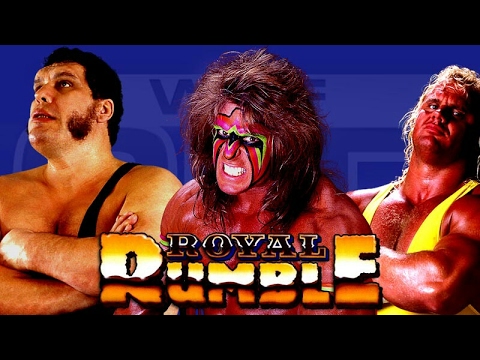 There is no arguing that the WWF / WWE Royal Rumble is one of the most exciting and anticipated events of the Wrestling year. While the fans always have fun, there have been several years where that fun quickly turns to frustration. Here are (In my sole opinion) are the Five times the WWE absolutely got it wrong!

Should have been = Andre The Giant

Reason = At that point, the seeds were just being planted for World Champion Macho Man vs Hulk Hogan at WrestleMania. Thus, neither man needed to win that match to set up the main event match. So, the WWF was smart in that aspect but their actual choice made no sense.

Studd didn’t even wrestle on the WrestleMania V card, making the choice completely meaningless. Sure, it was his first night back with the company, but still made little to no sense. With the outcome of the rumble not affecting the Mania main event, for the first and only time, they should have gone with Andre The Giant. McMahon knew he was close to retirement, and this would have been a nice gift to a man who made him and his father millions of dollars before Hulkamania.

It would have also set up The Ultimate Warrior to win the following year by being the first person to ever eliminate The Giant from a battle royal, but as you will read next, the WWF messed that one up to.

Should have been = The Ultimate Warrior

Reason = Common sense says the guy you are building to walk away from Mania as the champion should win the rumble, or at least the man you want challenging for the title. They knew the game plan was for Warrior to go over Hogan at WrestleMania, why in the world would you have Hogan win the rumble. He didn’t need it. Maybe his ego did?

Should have been = Bret Hart

Reason = The original plan for this Royal Rumble was in fact, for Bret Hart to win it. Then, Shawn Michaels got in Vince’s ear and made it clear that he wouldn’t lie down for Bret Hart at Mania and the whole thing was switched at the last second.

HBK was set to, and did win back the title from Sid later that night in the main event. However, the WWE did their best to try and cover up for Shawn’s jealousy by claiming that they switched the plan because Vince Russo predicted Hart would win on a show called “Livewire” that all of six people watched.  Ironically enough, it set up a WrestleMania Main Event of Stone Cold vs Shawn Michaels that didn’t happen.  Strange enough, it would be the same main event to come out of the following years rumble that did happen.

Should have been = Umaga

Reason – I realize 99% of the people reading this will disagree with me, but I stand by this opinion. Umaga was red hot and undefeated at the time. The original plan for Cena to defend his title at Mania was against HHH. As soon as it became clear HHH was hurt and wouldn’t complete, they switched it to HBK. They should have had Umaga in the Rumble, and saved his title shot against Cena for Ford Field in Detroit with 82,000 people watching in attendance. It would have been great. The Undertaker didn’t need the win.

Should have been = Daniel Bryan

Reason = I mean, do I really need to say it? The fact that Bryan was easily the most popular wrestler in WWE since Stone Cold Steve Austin at the time and wasn’t even in the match is a total crime. The crowd crapped all over the match and they had every right to. It was the single worst booking decision in Rumble history. Not only that, but they repeated the mistake the following year by having Bryan compete, but lose again as Roman Reigns won in the second worst booking decision in Rumble history.