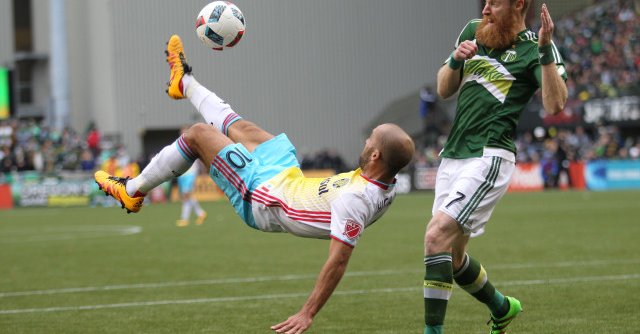 PREVIEW: Major League Soccer fans get their first glimpse of the 2016 season, and it is highlighted by a clash between the MLS Cup champion Portland Timbers and runner-up Columbus Crew.

Three months have passed since the Timbers beat the Crew 2-1 in Columbus to win the 2015 MLS Cup where Portland’s Diego Valeri scored only 27 seconds into the match for the fastest goal in MLS Cup history.

Rodney Wallace added a quick second goal seven minutes later to give Portland its first championship since joining MLS in 2011, and since the Trail Blazers won the NBA title in 1977.

However, moments before Wallace scored, the Crew players stopped playing when the ball rolled a few noticeable feet over the boundary line and instead of a stoppage in play, the Timber’s Darlington Nagbe kept playing and sent a pass to Lucas Melano, who would find Wallace in the box for a header into the back of the net.

So naturally the controversy would highlight the opening of the 2016 season….

CREW: (15-11-8 last season) Kei Kamara Scored 22 goals last season, tied for the league lead, Kamara finished runner-up for the league’s Golden Boot award. Kamara was also the top scorer in the MLS playoffs with four goals, including the Crew’s only goal against the Timbers in last years final. The Crew didn’t make many changes from last season either; they did sign free agents Conor Casey and Corey Ashe.

TIMBERS: (15-11-8 last season) didn’t make a lot of offseason roster moves. The loss of Wallace, a fan favorite, now playing with Arouca in the Portuguese Premier League, shouldn’t leave too much of a whole in the Portland attack and the combination of Valeri and Nagbe will be a formidable duo for years to come if Portland can keep them both.

TODAY (3/6/16): With better weather than expected in Portland at Providence Park, the Crew wore their light blue shorts and two toned white and yellow jerseys with red side stripes, the Timbers in their usual green and white kits. Portland would appear to be in the attacking mood taking more shots and came out of the gate with more energy and aggression on both ends of the pitch especially in counter attacks off of defensive set pieces.

At the 23rd minute mark, Diego Valeri would put the Timbers on the board first off a set kick only five feet outside the box with bodies flying in on Crew goaltender Steve Clark making it nearly impossible for him to see the shot from Valeri. After the first 45 minutes, the Crew would go into the intermission down one to Portland.

As for the second half, in the 68th minute Federico Higuain of the Crew would receive a pass from a wide Ethan Finlay to touch the ball up in the air to himself for a brilliant backward bicycle finish that would whip behind Timbers goalie Adam Kwarasey to tie the game 1-1.

Then in the 78th minute Portand would regain the lead after Dairon Asprilla would put a thin angled shot on goal which would deflect off of Clark and land just in time for Fanendo Adi to finish the play for the Timbers and put them up 2-1 which would end up being the final margin of victory for the Timbers as they defeat the Crew 2-1 in Portland in a rematch of last years championship final.

Next for the Crew, they hit the road to take on the Philadelphia Union this coming Saturday at MAPFRE Stadium.

5 Notes from Tribe’s 6-5 Loss to Brewers
Is Peyton Manning Hiding Something?