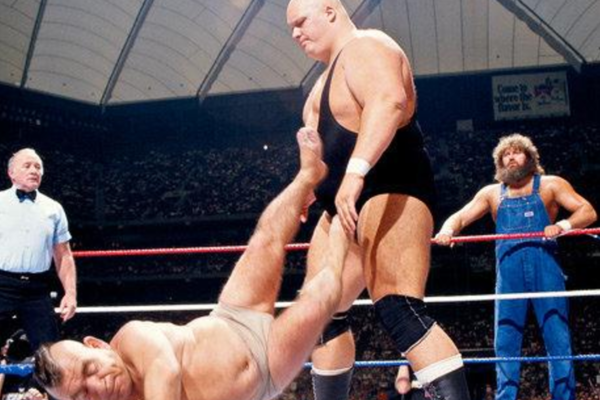 7. The Fall of King Kong Bundy

During WrestleMania 2 in three different cities in April of 1986, King Kong Bundy had one of the best builds of all-time, coming in as a mega monster meant to injure and eventually challenge Hulk Hogan for the WWF Title during the main event of the match in a steel cage.

Bundy put on a very respectable performance during the loss, and most of the summer of 1986 was part of the main event mix going up against Hogan until eventually moving on to a number of tag matches with his fellow Bobby Heenan family member, Big John Studd.

By WrestleMania III, Studd had left the company, and there wasn’t much for Bundy to do, so the company decided on a wacky six person mixed tag with Hilbilly Jim and two midgets going up against Bundy and his two person midget team. The match was nothing more than waiting for Bundy to ‘squash’ one of the midgets, which took place when he slammed and dropped an elbow on Little Beaver.

It was long way down for Bundy from the main event the year before, who by WrestleMania IV the next year was out of the company.